According to "The Wire", the British bible of musical excellence, Cluster 71 is one of the "One Hundred Records That Set The World On Fire". Very few albums from Germany can lay claim to this honour. The album is a monster: Cluster's debut work from the year 1971 (actually just called Cluster) contains a mere three tracks (untitled) and is quite an ordeal for untrained ears â back then, at least. Yet the album pointed the way forward like no other electronic opus. For the 50th anniversary of this influential album, we're releasing Cluster 71 as a special LP version: 500 copies, numbered, gatefold and 180g vinyl.


Dunkelziffer's "Songs For Everyone" out now! After Bureau B started its Dunkelziffer retrospective with the albums "Colors And Soul" and "In The Night", we are excited to make the band's last studio album "Songs For Everyone", which was released in 1989, finally available again. Displaced from their spiritual home (the Stollwerck complex had been levelled in 1987) and robbed of the collaborative exchange it facilitated, Dunkelziffer took a different tack on 'Songs For Everyone', slimming down to a sextet with a newly streamlined sound. Olek Gelba and Reiner Linke remained in the percussive pocket, laying the foundation for Von Senger and Schubert's melodic prowess, with newcomers Jorge Guarin Quintaro and Irene Lorenz breathing fresh air into keys and vocals respectively. We are excited to announce a brand new compilation exploring the explosion of wealth of music springing from the squats and bedsits and art schools of Cologne, DÃ¼sseldorf, Hamburg and West Berlin in the aftermath of punk from the likes of Der Plan, Holger Hiller, Palais Schaumburg, Conrad Schnitzler and a host more. Drummer, percussionist, producer, radio journalist and DJ, Niklas Wandt's musical path can be traced back to his childhood, signposted by jazz and psychedelia. He has presented WDR 3's Jazz & World programme for a number of years, performed live and recorded albums with bands like Oracles and Stabil Elite. In 2018 Niklas Wandt and Wolf Müller released the highly acclaimed "Instrumentalmusik von der Mitte der World" album (on Growing Bin Records). Wandt also founded the synth-pop project Neuzeitliche Bodenbeläge with Joshua Gottmanns. Now, Niklas Wandt is about to release a quite astounding album under his own name on Bureau B. The full scope of influences gathered and absorbed over the years coalesce on Solar Müsli – all the pieces of the puzzle fall effortlessly into place. This is not formalism at work, but an exhilarating, freely flowing album which started out as an exercise in improvised percussion and developed into a multidimensional journey, at times both introverted and ebullient. "Solar Müsli is out now on CD, LP and digital. Enigma Stefan Schwander aka Harmonious Thelonious with a copy of his new compilation Instrumentals! (A Collection Of Outernational Music Studies) – out today! All eight musical objects collected on "Instrumentals!" document a chapter in Harmonious Thelonious's work, that left the noisy background drones behind in favor for a signature sound full of echoes of ancient rituals and ecstatic ceremonies. Eight growing outlaw music studies crammed with living, deeply haunting entities.

Hamburg's post-kraut-electro trio Love-Songs and Ulf Schütte (Datashock, Phantom Horse, Little Whirls) have formed a group named Love-Songs & U. Schütte for the duration of one long-playing record. This body of work bears the modest title [Spannende Musik] – an attribution which sounds not in the least bit pejorative to those with no skin in the game: "Yes, it really is exciting music!" Out now on CD, LP, digital!


Out today: Kiosque Of Arrows 2

A collection of 11 outstanding pieces, representing a reflective collage of cut-ups, observations and memories in the never-ending search for inexplicable beauty. Compiled by Tolouse Low Trax.


Step onto the springboard! Spring is Thomas Klein's fourth Sølyst release on Bureau B, gleaned from material spanning the past three years. The time he has spent with these pieces has been time well spent. In revisiting them, he has posed new questions, rearranged and reworked some elements, dismissed or discarded others. The process of reappraisal has seen certain passages expanded upon, others pared away or refined. Out now! Out today: Our new Dunkelziffer reissues "Colours And Soul" (1983) and "In The Night" (1984). Don't miss these further than far out New-Wave-Kraut-Dub-monsters. Taking a radical approach to sound, style and group dynamics, this loose collective of musicians and artists blazed an experimental trail through the 80s, offering an alternative vision of German pop fit for a decade of constant change. Demo Tapes 1984-86 by Heiko Maile includes a selection from his beginnings of electronic music and the bizarre sonic worlds he inhabited. Out on CD, LP, digital!


SORBET – This Was Paradise Out today, the debut album 'This Was Paradise' by SORBET – the project of the Irish producer Chris W Ryan. Happy Release Day <3 Available everywhere now. Out today: Our reissue of "Weites Land" – the only collaboration album of electronic and ambient pioneer Hans Joachim Roedelius & saxophone free spirit Alexander Czjzek. Originally released in 1987, this organic jazz masterpiece has been out of print for many decades and became a sought-after rarity, so we are very pleased to make it finally available again. Alex, Thomas and Jochen from P!OFF? already received their copies. Our reissue of the self-titled and only album from the Munich band P!OFF?. Originally released in 1982, this LP became one of the most sought-after records of the early Neue Deutsche Welle. We are happy to finally make this rarity available again! Out today. Terrible times indeed. Discerning pop music fans will therefore be more than pleased that intellectual rock darlings Ja, Panik are back after a seven-year hiatus. This comes as somewhat of a surprise, given that in their 2016 band autobiography Futur II – published to mark their tenth anniversary – the Berlin-based quartet of Andreas Spechtl (vocals, guitar), Stefan Pabst (bass), Sebastian Janata (drums) and Laura Landergott (keyboards & guitar), pretty much announced their permanent dissolution. "Die Gruppe" is out now on CD, LP, digital!


Der Plan – Save Your Software 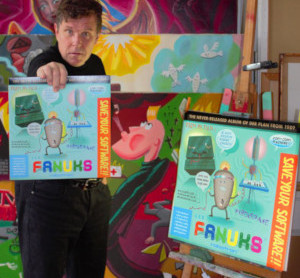 Finally out today: "Save Your Software" by Der Plan aka FANUKS (a robot band which was supposed to make DER PLAN immortal) with 6 unreleased tracks from 1989, the history of the Fanuks and 3 new pieces. Check out the new video to the single 'I Can Love' and get your copy of the album here. Bureau B are excited to announce the arrival of a new Jimi Tenor double album! Following on from last year's NY, Hel, Barca compilation which showcased Tenor's early works and cuts from his first six albums, Deep Sound Learning shines a spotlight on unreleased tracks from 1993 to the year 2000. This intensely prolific period saw Tenor send countless DAT tapes to Warp Records, his label at the time, who stacked up the recordings in the office safe. Some of the songs preserved on those DATs made their way onto various Tenor LPs – whilst others remained unreleased to this day. Jimi Tenor and Bureau B have retrieved said tapes and crafted a double album (CD/LP) of previously unheard tracks in what is much more than a simple archival exposition.

Ever since he released his music in the early '80s, Michel Banabila has been hard to pinpoint to a specific genre or style. His musical output includes jazz, experimental cut-up electronics, world music (especially influenced by the Fourth World music as developed by Jon Hassell), New Age, eclectic pop tunes, music for dance or other stage projects, and soundtracks for TV productions. Wah-Wah Whispers focuses on Banabila's more recent output. It is a collection of works showcasing many facets of his music: a journey visiting the minimal and cinematic sample scape in the opener Take Me There, a robotic reggae-like rhythm (Tic Tac), contemplative ambient / fourth world scenes evolving into a downright funky beat (Hidden Story), the synth version of Secunde, and more. The album ends with a kaleidoscope of atmospheres gradually building up to a noise climax in Narita (the only collaboration track on the album, with Rutger Zuydervelt / Machinefabriek). "Wha-Wha Whispers" out now on CD, LP, digital!

Celebrating 40 years of Die Welttraumforscher with our new compilations "Die Rückkehr der echten Menschheit (1981 - 1990)" & "Wir arbeiten flür die nächste Welt (1991 - 2012)". Here's a rare shot of creator and sole member Christian Pfluger who is sending us his Forscher greetings while he is excited about both collections being finally out today. Dive with us into the eccentric, heart-warming pop songs from a parallel world. All tracks have been remastered and the artwork has been lovingly crafted with the original Welttraumforscher drawings.

"My Frequencies, Where We" from Mapstation is out today! "My Frequencies, Where We" is hinged on a Cluster-influenced sense of rhythm, but one that's obscured by glitches, crackle and alien synthetic atmospheres. At this stage in his career, Schneider's primary point of reference is his own long career, so there are elements of To Rococo Rot or Kreidler that spring to mind as he cooks out eerie dub flavors from stark, disparate ingredients.

With the band's tenth anniversary in their viewfinder, CAMERA released their fifth studio album "Prosthuman". As befits an age in which realities can change in the blink of an eye, from one day to the next, the Berlin band never tire of changing themselves, their music or personnel. As Karlheinz Stockhausen noted: "New methods change the experience. New experiences change man." Taking this as their lead, Michael Drummer (the drummer) and CAMERA surprise us once more on "Prosthuman" as they reinvent and reformulate their sound without sacrificing the project's identity which has matured over the past decade. Less surprising is the fact that some record stores give CAMERA their own section, alongside Krautrock pioneers like NEU!, Can and La Düsseldorf. "Prosthuman" is out now on CD, LP, digital! Out today: RVDS' new album "Moods and Dances 2021". Dreamy & meditative library greats taking you away to another dimension. Watch the new video "DX7's Broken Hearts" below!

In the late 1970s Peter Baumann invited Conrad Schnitzler into his Paragon Studios where they recorded the album Con. 10 unreleased outtakes from these sessions were now compiled into the album "Paracon (The Paragon Session Outtakes 1978-1979)". Thanks to Wolfgang Seidel, co-author of these pieces, who opened up his archive of recordings to Bureau B.


Conny Frischauf debut album "Die Drift" out on Bureau B! The upcoming Ja, Panik "Die Gruppe", their first on Bureau B, will be released on April 30th. Please check out the video for the first single "Apocalypse Or Revolution" below!